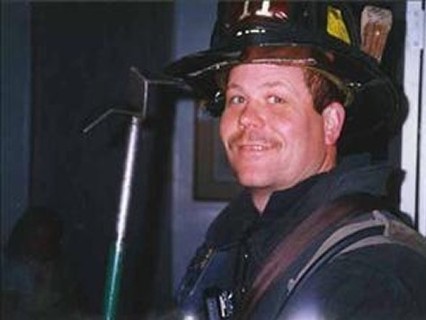 About a year or so ago my wife and I were awakened by an unbelievably loud knock on the door. The kind of knock you would expect if it was a fire or the end of the world or something. I got up, went to the door and never even thought to put on my pants. I was in my drawers the whole time! Some of my underwear are so worn out they are just an elastic band. Well, at the door was a NYC Fireman, named Matt Rogan in full fire fighter gear carrying a pole with air tanks, helmet, the whole bit. Matt Rogan is part of 11 Truck. That is part of our local fire house. They are the coolest guys in the world. They drive around in their fire truck at night blasting the song Low Rider by War. They love the neighborhood (Lower East Side and East Village) and the neighborhood loves these guys back. They are really cool. Not jerks or assholes. Just good guys! So Matt Rogan comes in our apartment at 3 in the morning because he needs to look out our back window to check to see if there is a fire or not. We live in the rear, ground floor. There was no fire but Matt made sure. The whole time Cindy was sitting up saying “Where’s the fire, where’s the fire”. After Matt was finished checking for the fire I asked him if it would be OK if I took his picture. He laughed and said “Sure, why not”? Here is the picture I took of him that night. He was such a sweet guy. Imagine that I took his picture while still in my underwear. If you look close you can see Cindy setting up in the bed saying “Where’s the fire”. He was an awesome guy. You could just tell and I think you can tell from his picture. Our safety was guaranteed by Matt that night! On September 11, 2001 we lost NYC Firefighter Matt Rogan as he was guaranteeing the safety of other New Yorkers at the World Trade Center. He was a quiet man we have learned from talking to some of his brothers at the fire house in the East Village where he worked. He had a wife and 3 children. These aren’t numbers that we lost in NYC that day, they were people.
If you want to talk about martyrs, I submit NYC Firefighter Matt Rogan.